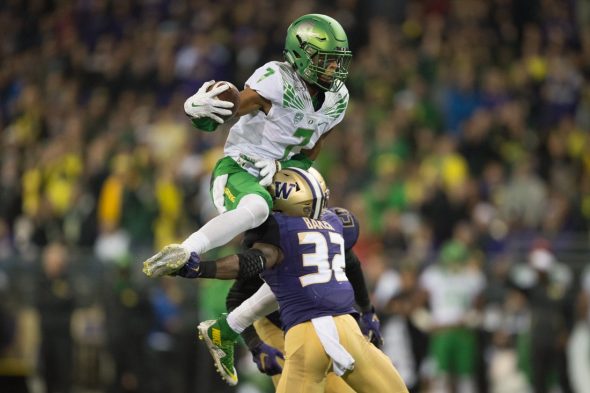 Darren Carrington a senior wide receiver who opted not to declare for the 2017 NFL Draft, was arrested weeks ago after his vehicle collided with a pole in Eugene, Oregon.  The team suspended him indefinitely at that time, and in the weeks since has opted to dismiss him from the school.

“I have visited with Darren Carrington and informed him that he is no longer a member of our program,” Oregon coach Willie Taggart said in a statement (h/t Michael David Smith of Pro Football Talk. “We will always consider Darren a Duck and support him in any way we can. We wish him all the best in his future endeavors.”

Carrington is viewed as a mid-round pick, and I would assume he lands at an FCS school.

Carrington has several run-ins with the law according to reports.

“He has previously been suspended for failing a drug test, cited for having an open container of alcohol, and accused of pushing a man to the ground and breaking his arm in a confrontation on the street that apparently took place because Carrington mistook the man for someone else he had previously had an issue with.”