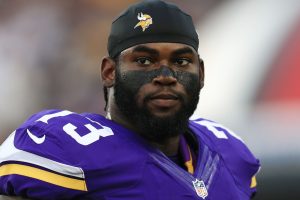 The Minnesota Vikings drafted Sharrif Floyd in the first round hoping he would be a dominate force in the middle of their defense. After only playing in one game last year before tearing his knee up, things did not look up. In March, NFL Network Insider Ian Rapoport reported nerve damage in his quadriceps still wasn’t firing months after surgery to repair his meniscus, which could leave his 2017 NFL season in doubt.

“I feel like progress is being made,” Floyd said, via the Star Tribune. “It’s just taking its sweet old time.”

The 26-year-old defensive lineman dismissed the idea that his career is in jeopardy because of the injury.

“No one has said that,” Floyd said. “I think it’s just a rumor going around right now. But right now, I think everything is going to be all right. It’s just a matter of when.”

“Fighting to stay positive,” Floyd said of his circumstance. “Sticking with my team. That’s the bright side of things now. Just working out and training. I’m taking care of everything in my power and controlling what I can control.”