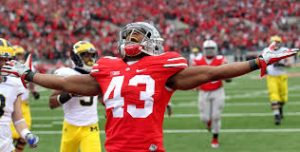 Former Ohio State linebacker involved in an argument with a woman

It looks like Jets draft pick Darron Lee may have some explaining to do.  According to a post from @GunnerPunner, the former Ohio State linebacker was picked up and moved out the way by defensive lineman Leonard Williams at a music festival.

Here are the videos:

Part 2/2 man getting picked up like a bag of groceries pic.twitter.com/Io7HGBS3Mr

He says the smaller guy (Lee) was “shouting at a woman, mid-argument. He then started to manhandle her and call her names.” It took a few people to get him away from the woman, who was “obviously shaken and in tears.”

It looks like Leonard Williams may have saved his teammate from making a dumb mistake.

Basically did a loop, then came back and grabbed the woman as soon as people had dispersed. Started dragging her away with him.