Wonderlic Scores for LB’s; Who do scouts believe is the best? 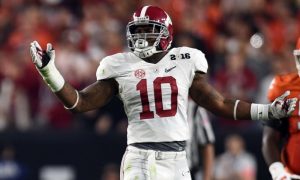 Reuben Foster scored a 9 on his Wonderlic Exam

Bob McGinn of the Journal Sentinel is an animal at finding out information before the draft.  He talked to scouts and asked them to list the best linebackers in order. He wanted to know their top 5, the best received 5 points, when the 5th best received one.  Here are the results for all four linebacker spots.