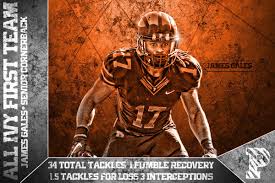 James Gales of Princeton is a big time play maker. I love his skills in the secondary

NFL Draft Diamonds website has been providing our readers Prospect Interviews over the past 3 years and this year we mixed things up a bit. Our questions are designed to give our readers a little more insight on the draft eligible player. We hope to bring you more than 500 interviews of NFL Draft Prospects this season. You will be able to track them all on the front page of our website in the banner to the right.  Now let’s meet our next prospect!!!

In High school, my team and I cleaned a local baseball field and helped teach/play with the kids.

My father is my role model, I’ve never met a person that has worked harder in their lives.  Yet he still makes time to come see me play/preform.

I played nearly every sport, but my main ones were Football and Basketball.

Dating back to Pop Warner, I’ve played every position on the field.  When I got to High School I primarily played RB and CB, depending on the situation I’d move to receiver or QB and on defense occasionally Safety.  Here at Princeton I played Nickel corner, and some safety.

What separates me from other corners is my play recognition and ability to retain information from film study and apply it to game situations.

The biggest thing I look for during film is receiver tendencies.  If the QB has a go to guy I look for things like when does the QB look to him? What routes does the team like to run in certain situations? How is the receivers get off in pass? In Run? Does he have any tells on what the play is going to be pre snap? Things like that. 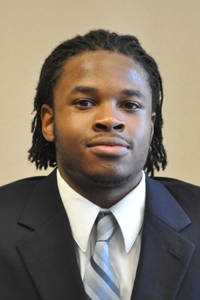 He best player I have lined up against would probably be my old teammate Seth Devalve, his combination of size, speed and athleticism wasn’t something I was used to comin out of High school.  Besides for him the best receiver I’ve faced would be Justin Watson of Penn.

I’d like to think of myself as a Josh Norman, someone that can play off coverage, read, dissect and anticipate a play but can also get in a receivers face and challenge them at the line.

The biggest obstacle I’ve had to over come was rewriting a 10-12 page book report at 3am due at 5pm the next day.  The problem was we were traveling to Harvard that same day and I would have internet access until we got to the hotel around 5pm.  Just before submitting the report, my computer crashed and it was erased, so I had to rewrite the whole paper before practice at 8am.  I ended up finishing the paper in the hour window we had from the end of practice until the bus left.

I have a pregame routine, but I don’t have anything specific I do before a game.  My routine is to arrive at the stadium exactly an hour before warm up, get my ankles taped, then put on everything except my shoulder pads, tape my fingers and wait for team prayer.  Once team prayer starts I put on my shoulder pads, pray, then listen to a video I’ve watched before every game I started since High School “How Bad Do You Want It”.  Depending on how much time is left I may listen to more music and do some minor meditation or I may have to go out on to the field.

My biggest strength is my willingness to learn and get better.  My DB coach in college had a saying “do things better than they’ve ever been done before” and I’ve adapted that into my play, and my goal is to get better every day.

My biggest weakness is probably that I’m my biggest critic, if I feel that I haven’t done something right, no matter how good of a play it is, I don’t take the good with the bad I only focus on the bad and how to get better.

I would say I’m a smart, instinctual football player who works hard and has shown resilience and the drive to never quit and to achieve the goals that my team, coaches and I set forth.

My favorite players of all time were Deion Sanders and LaDainian Tomlinson.  They were the reason I wore 21 in High school.

Ever since I was in high school I’ve always wanted to live in every major type of home. With a loft apartment being my favorite, my first big purchase would probably be that or an different style of home.