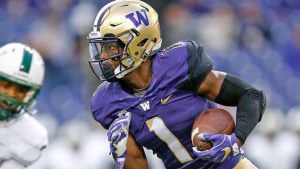 Pros: Instant acceleration and great speed down the field. It’s effortless for him to kick it into another gear. Explodes off the line and creates separation. He tracks down the ball very well. Shows great footwork and a good route runner. Doesn’t lose a gear going in and out of breaks, he can accelerate quickly. He is a threat to score any time he catches the ball. Deadly returner, he makes huge plays consistently. Sudden in his breaks. One of the best double moves I’ve seen from a receiver this draft class. Many times on vertical routes he had to slow down, track, and catch the ball. Rumor has it he ran a 4.3 in Washington, if that’s the case at the Combine, he’s shooting up everyone’s draft boards.
Cons: Lacks height and strength. Didn’t go up against press coverage that much. Struggles against very physical cornerbacks. Many of his catches were in space, so not a lot of instances where he had to make a contested catch. Has some double catches and focus drops. Needs to do better with hand technique against cornerbacks rather than make one move and work from there. Doesn’t seem like he has great arm length either, and probably won’t build himself up more in the NFL.

Overall: John Ross is a DeSean Jackson clone. He’s a much better route runner than you’d expect and while he doesn’t have the size you see from most elite receivers, he has deadly speed and has made clutch plays in his collegiate career. Ross knows how to get separation and his acceleration is so effortless, it’s crazy. He could be a #1 or #2 receiver at the next level. He’s not going to make spectacular one handed catches or win jump balls consistently, but he’s the guy that is going to outrun your defenders and create separation anywhere on the field. Teams like speed, and this is a guy who can make you pay big time over the top