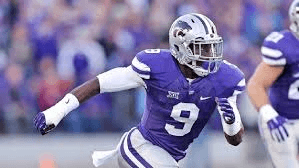 Elijah Lee was one of the biggest Combine Snubs in 2017. This kid is a freak

Kansas State linebacker Elijah Lee left college early, and it is starting to pay off dividends. Lee led the Wildcats with 110 tackles as a junior, including 6  1/2 for loss, earning a spot on the all-Big 12 team. Lee projects as a middle or late round hopeful in the NFL Draft.

Lee is now gaining more interest. He has a private workout with the Arizona Cardinals and will also take a pre-draft visit with the 49ers.