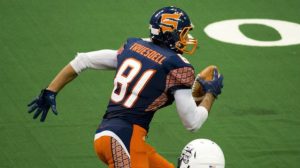 In 2013, Nick Truesdell the 6’6, 252 pound wide receiver found out that his size and talents could only get him so far. He found an agent, attended Cincinnati Bengals camp, and earned a tryout with the Tennessee Titans.  The amazing pass catcher knew he had the talents, and was forced to take his talents to Colorado where played for the Indoor Football Leagues’ Colorado Ice. Truesdell would spend the next few years trying to get into the NFL. He spent time on several teams, before he finally landed a spot with the Colts.

After playing solid ball for Bemidji his play earned him an invitation to Green Bay Packers camp. That only lasted a week. That was when he signed with the Spokane Shock.  He was a dog for them scoring 19 touchdowns with five weeks to go.  That is when NFL teams began to take notice.

On July 28, 2016, He was signed to the Indianapolis Colts roster. Two days later on July 31, 2016, Truesdell was waived. TWO DAYS, that never sat well with Truesdell.

It was not what he had hoped for, but it did open the door for the veteran combine a few days ago in Arizona.  Truesdell knew he could impress scouts if he attended so he signed up and the rest is history.

I talked to several scouts who said Truesdell straight murdered the veteran combine. He ran a 4.47 at 6’6 and 252 pounds. The teams ran him through drills and that was more than enough.  We are learning that by the time he went to the airport, over six teams had already called his agent and began offering contracts.

BREAKING: NICK TRUESDELL HAS SIGNED WITH THE MINNESOTA VIKINGS