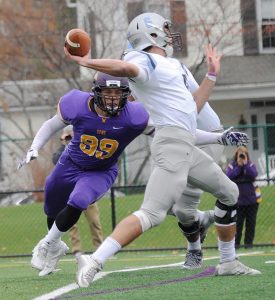 One of my offensive lineman introduced me to a center for adults with mental disabilities. He had volunteered there before. The center was near our practice facility and I had no idea until he told me about it. I volunteered there a few times and invited a couple of my teammates to come along. It was eye-opening and provided me with great perspective.

Romanticism & Revolution. It was a political science class which was centered around the political ideologies of Jean-Jacques Rousseau. But to be honest, every class at Tufts was challenging.

Tim Tebow. He is an amazing person. I was fortunate to meet him last summer, and he was as genuine and authentic as someone could be. He is a great role model.

Baseball, Basketball, soccer, track, you name it. I was a competitive kid.

I played a lot of positions at a young age, DE, TE, WR, FS, CB. I even remember playing left tackle at one point. But I always knew I wanted to be a Quarterback, and have played that ever since 8th grade.

I think that what separates me is that I have been prepped over the past few months by ex-NFL QB’s. Exposure to NFL playbooks and training has been beneficial. I think a lot of young QB’s get caught up in thinking that their college offenses will work at the next level. At the next level things are different, and I am fortunate to have already been exposed to NFL playbooks as part of my pre-draft training so that I will be able to hit the ground running. I am excited to get a chance to be coached, and to play in a Pro system because it will undoubtedly fit my game better. I can’t wait to see how much my game will improve, and how quickly it will improve, with that type of coaching.

When I watch film of NFL defenses as a part of my NFL prep, I focus a lot on fronts and blitzes. Coverages are obviously important to know and dissect, but being able to identify fronts, DL stunts, dogs, and blitzes will be imperative at the next level.

When I watch NFL QB’s, I focus on footwork and their eyes. My footwork has been the most important part of my training due to the fact that I played out of the gun more often than not in college. I think the great QB’s use their eyes very effectively in order to manipulate defenses.

Tom Kleyn from Amherst was a great linebacker. He always ended up around the ball, and was very smart. There were a lot of good defensive players at Amherst and other teams in our league.

I have always tried to replicate my game after Tom Brady. I can still remember watching the Patriots play the Pittsburgh Steelers when I was in the 5th grade. Immediately following the game my older brother and I went outside and I tried to replicate Tom Brady’s throwing motion as best that I could. Even now, twelve years later, I watch film of him once a week. In addition, Tom Brady knows the game and defenses so well, and that is something I have always tried to emphasis and know inside and out.

Staying true to myself and learning to trust my faith have been obstacles for me in recent years. I have a great support staff in my family to help with things like that. 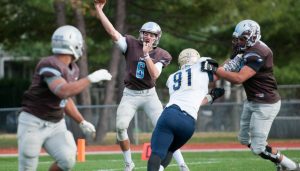 I review all my notes that I’ve made throughout the week, and make sure I know all my reads and adjustments. I try to do the same thing to get my body ready for games each week, not because I am superstitious, but because I have figured out how to get ready and I replicate it.

My height/size and my football IQ.

In the eyes of a scout, playing Division-3, and my numbers at Tufts would be considered a “weakness” but I think that is just a representation of the offensive system that I played in. That is out of my control so I am not too worried about that at this stage in the process.

All I want to do is win. That’s what drives me. I now want to win at the highest level possible and keep winning for my teammates. I love making the commitment each year to do everything I can to help my team win. That comes with a lot of sacrifices that most people aren’t willing to take, and I love it.

I loved watching Tom Brady and Peyton Manning. Growing up watching those two was a blessing.

I will pay off my student loans.