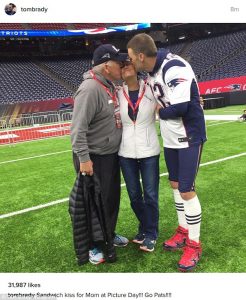 Tom Brady Sr. is not happy that anyone every questioned his son’s integrity, and last night his father called the Patriots win redemption.

“It was just awesome,” Tom Sr. said. “He puts everything he can into every single game. But this one, I heard he just said, ‘I’m winning this one for my mom.’ That one jerks the tear ducts big-time. … She lives and dies with every one of her children, whether it’s in a football game or anything else. And she was very thankful. Very thankful, yeah, just very thankful that this played out. . . .

“I said to my daughters, my granddaughters—You will never experience a game like this again. Fifty years from now, they’re gonna be talking about this game. . . . It was pretty awesome. It was pretty darn awesome.”

“Yes, it did [mean more],” Brady Sr. said. “It did. It did. Winning five Super Bowls, and coming back from all the stuff that he was accused of, that was a very difficult thing for the whole family, to be impugned. And lo and behold . . . It just meant a lot. It just meant a lot because anybody who’s watched him play football for 15 years, in cold weather, in heat, on the road or at home, knows what he’s been.

I love the way he put it. Do you think Tom and the Patriots should still have an asterisk next to their name?