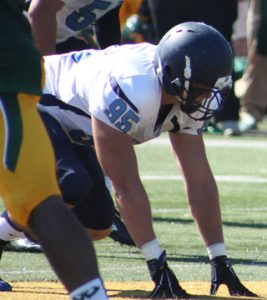 Logan Schultz is a tough pass rusher. I like this kid

Hardest college class would have to be environmental science. I went to a business school to get away from science classes

Born and raised in Saginaw Michigan

My role model is my dad hands down. My dad was a full ride scholarship guy at Saginaw Valley State University, one of the strongest guys on the team. I’ve always looked up to him for that. Then once he graduated he went into the family business of plumbing. A normal day plumbing? We cant just dig a trench with a shovel to lay the pipe, instead we sometimes need to run a jackhammer with a big spade bit a few inches at a time because the ground is mostly clay…The worst part about that? You’re putting in hundreds of feet of pipe. I mentally don’t know how you can keep showing up to a job like that when he is in his early 50s. As cliché as it sounds he is a walking hero in my eyes

The biggest thing I always felt I had an edge with is strength and speed. There were times I made tackles from the opposite side of the field simply because I would pop the clutch and get to 6th gear as fast as possible 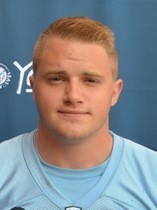 Breaking down film I look for tendencies, personnel changes at different situations, flat out what type of offense do they run, trick plays

Toughest players would be Ferris State O-Line my sophomore year

The biggest obstacle I ever faced in life was being a walk on. I graduated from a small high school same height roughly and only weighed 175lbs. About half way through my first year at Delta College I just felt like something was missing and needed football. So I worked my ass off and in about a half a year I weighed just shy of 200lbs. That’s when I called Northwood University and told the coach I’d like to walk on and see if I can make a spot for myself. I’ll never forget till the day I die I walked in did a quick workout with the head coach and he asked me to step on the scale. I weighed 199lbs on the dot he laughed when he had seen the number and said something along the lines of well I don’t ever expect you to see the game field but you can try. I told my self I wanted to be one of the biggest fastest guys that was NEVER recruited even if it kills me. I worked out with the team and even more after hours breaking into Northwood’s weight room over the years (which has shorter hours than a bank). By senior year I ended up breaking 4 records as a defensive end. As it sits I hold the squat, 5-10-5, vertical, and 40-yard dash records

Pregame rituals – loud death metal and an eye black design around both eyes down the cheeks. A terrible description that’s best seen in person.

Biggest strength I would say I feel mentally bulletproof

My biggest weakness I would say is on small number of occasions not being sneaky enough when I broke into our weight room after hours. However after getting kicked out by security and giving it 20 minutes on the second attempt I would normally be sneaky enough

If you were a GM I would tell you don’t judge and worry about where I came from, no one worries where the Batman came from all they care about is that he emerges in time

Paying off the huge amount of student loans I have