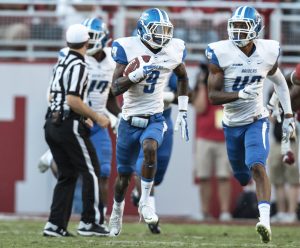 Coolest thing I ever did was give money, clothes and my favorite pair of MTSU gloves to a homeless man close to campus. Being homeless it touches me a lot to see someone without

Born in New Orleans, moved to Kentwood Louisiana after Katrina 2008

Marlon Moore is my role model because he showed me how to love unconditional and gave me a chance to be successful when everyone had given up on me. His family welcome me with open arms without wanting anything in return. His kids are like my siblings. We are real close and communicate everyday

Sports growing up was basketball and track

My other position was Safety and wide receiver. I was a 4 star safety coming out of high school and switched to cornerback at Mississippi Gulf Coast

My long arms and my nose for the ball. Most corners don’t like to tackle, but I welcome tackling. My 6’2 frame and length is something I use especially against tall receivers, also my speed allows me to run with quick receivers. Quick hips help me break on the ball as well

Toughest receiver I faced was from Western Kentucky number 2.

I compare myself to Xavier Rhodes and Antonio Cromartie

Biggest obstacle in my life was Katrina 2008 because it had a trickle down effect on my family. Mental and physical. Having to relocate from my home, watching people die on the bridge during Katrina and also my brother being murdered in 2013 I feel was all a domino effect from Katrina. I never wish anyone to go through a natural disaster like that. Had to readjust to Kentwood from New Orleans, making new friends being accepted and playing football with a new group of guys

Pregame rituals listening to music to block everything out and sit in a corner to reflect that I’m still standing after all my struggles. Always thank God for my talent 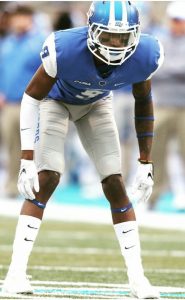 My biggest strength is my work ethics, athleticism  and ball awareness

My weakness is sometimes I want to play over aggressive

GM, I will be the next Tom Brady and I will not let you down

3 people I would have dinner with would be Ali, President Obama and my brother (Kerwin Borden Sr.)

First item I will buy once in the NFL is a house for mother since we have not had a house since Katrina 2008.