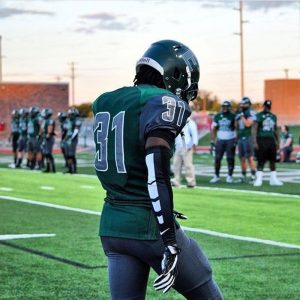 DeSean Anderson is a playmaker for ENMU. I love his abilities

A friend of mine was working with kids to get them a good workout on the football field, so I helped him out with that.

American History is the hardest thing for me because I find it hard to focus and remember the dates and names.

I am from Orange County California.

My role model is Tyrann Mathieu because he had something that set him back but it did not keep him from attainng his dream.

I ran track all the way through high school and I played basketball until my junior year of high school.

When I played pop warner I played runningback, reciever, and safety. That’s when I got my first pick 6 and I put my focus more on defense.

What separates me from others in my position is my footwork and work ethic. If I can’t do something at the time I will work on it until I can do it. I will not let anyone set my limitations.

When I breakdown film I first look at how the receiver gets off the line and how he sets up his routes. Then I go back and look at how my footwork and hips look. If I have to adjust the way I play then I will do so.

Jeff Thomas from Tarleton State is easily the toughest. His release off the line was aggressive and he can move. He is a great receiver.

I would compare myself to Brent Grimes based on the simple fact that I am not as big as the average corner in the league so I make up for it in speed and my footwork. I don’t let my size hinder me from doing what I am supposed to when I hit the field.

My biggest obstacle was having to continue playing football because my last 2 years of pop warner I didn’t play because the coach had his son on the team. When I got to high school I was told I wasn’t big or good enough. When I got here to Eastern I got held back a lot. I really thought about just quitting the team, but I just could not let those people get the best of me. I just keep pushing myself and when I make it to the next level, I’ll let that speak for me.

My pre-game rituals are to warm up and pray for a clear mind and no injuries.

My biggest strength is forgetting the last play. 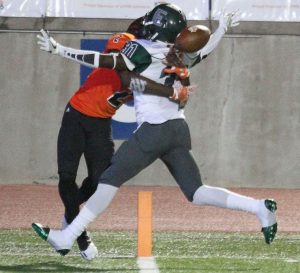 My biggest weakness is probably being too hard on myself. I am my biggest critic, so if something does’t look or feel right then I get frustrated.

My favorite team growing up was the San Diego Chargers. My favorite player was LaDanian Tomlinson. When I played runningback I use to watch him play and attempt to mimic his moves.

If I could have dinner with 3 people it would have to be Malcolm X because he has a powerful mindset, Floyd Mayweather because of his work ethic, and Kendrick Lamar because of his creativity.

Once I am in the NFL my first big item I would be would be a decent house for my parents because they struggled for me and my 5 other siblings to have stuff and it would only be right show my appreciation for them.