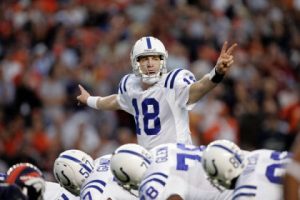 Did the Colts steal hand signals from other teams?

Deion Sanders is a passionate person, and yesterday when newly discovered Hall of Famer LaDainian Tomlinson brought up Spygate as something that tarnishes the legacy of the Patriots, Deion went in saying the Colts cheated as well.

“Did those critics say anything about the wins that the Indianapolis Colts had? Because they were getting everybody’s signals,” Sanders said on NFL Network after the game.

“C’mon, you walk up to the line and you look over here and the man on the sideline is giving you the defense that they’ve stolen the plays of. We all knew. Everybody in the NFL knew; we just didn’t let the fans know,” a passionate Sanders said.

“That was real and that was happening in Indy.”

I want to hear more about this situation.  Who was the quarterback during that era? Was it Peyton….