Getting Ready for the Combine; Must Read Statistics from @DraftMetrics 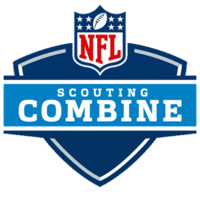 Getting Ready for the Combine

The NFL Combine has evolved from a virtually private workout into a major “made for television” event. There is constant chatter about how meaningless the Combine is, but it continues to gain popularity among fans. This year’s on-field workouts begin on March 3 with the bench press generally occurring the day prior to each position’s on-field workouts. The schedule for on-field activities is as follows:

There are two purposes for this article. The first is to present the historical standards for the Combine. This gives the television viewer a sense of what makes a good Combine performance for each drill. A fan can then make a judgment regarding how well a player performed and enhances the viewing experience. The second purpose is to review whether Combine performance is predictive of draft position.

Following are the seven drills for which I have accumulated historical information, principally from public information:

The following table shows the average by drill over the past 10 Combines (2007-2016) for each playing position. This table shows averages for (1) all combine participants and (2) for only those participants that are drafted.

The bench press is ignored for quarterbacks, wide receivers and corners as very few participants at those playing positions perform the bench. I have also excluded fullbacks since there are so few results in all drills.

These tables set the historical standard for the Combine. Using that information as the base, can it be shown that Combine results are predictive of draft position? A large difference between all participants and players selected in rounds 1-3 indicates a drill that might be significant for a particular playing position.

Here is the distribution of the 91 data points when comparing draftees from round 1-3 and round 4-7:

Over 70% of the “positive” data points showed a 2% or lower difference. So there is very little difference among all participants and those drafted in the first three rounds. A few observations:

Maybe it is more meaningful to look at the predictive aspect of a drill by measuring the results of the top Combine performers to see whether those participants are drafted early more frequently than others. This analysis does show significantly different results than the previous averages.

Here are the indices for each drill and each playing position.

To get away from bombarding the reader with numbers, I assigned ratings (expressed as plus or minus) that might give a clearer picture of the frequency of top 10% performers being drafted in the first three rounds. Here is the scale I used:

I then applied the scale to the indices calculated earlier with the following results:

The net number is the net pluses (expressed as a positive) and minuses. This measures the likelihood, by drill, of top 10% performers being selected in the first three rounds as compared to all participants selected in those rounds.

A few observations regarding the top performers and their draft position: