With the 24th pick in the 2017 NFL Draft, the OAKLAND RAIDERS select… 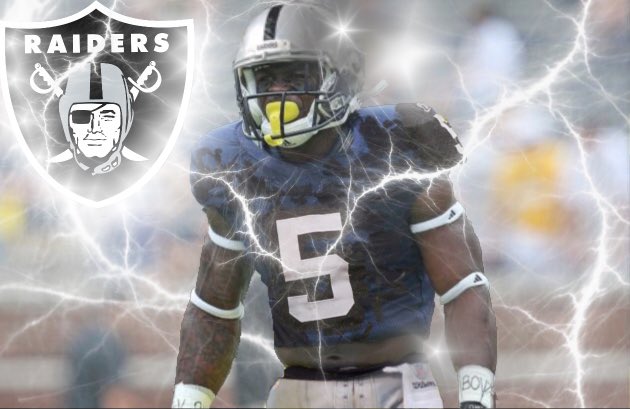 With the 24th pick in the NFL Draft the Raiders select…. Edit by @rileyshack

This piece was written by Dylan Lloyd of Draft Engineers

This season was a return to glory for the Oakland Raiders. They went 12-4 and made the playoffs for the first time since 2002. The Raiders had some free agents who produced at a lower level than expected and franchise quarterback Derek Carr got hurt but overall it was an amazing season. Now the Raiders have the 24th pick in the draft and must use it to get another impact player.

The Raiders have a plethora of choices for their first pick in this draft. At 24, it gives general manager Reggie McKenzie a challenge. Getting an immediate impact player will be hard but this year’s draft is loaded with talent. In this article I will give some of my favorite options for this pick.

My first option is my favorite but it’s also my most likely. O.J. Howard is one of my favorite players in this draft. He’s a complete tight end who can be a vertical threat and a run-blocker. The more I see Howard going to the Browns the more I like it, but if he falls to the Raiders they will select him in an instant.

Clive Walford hasn’t really worked out for the Raiders so getting a reliable tight end for Derek Carr would help this team out. Also the Raiders could use another blocking tight end after the Lee Smith’s injury.

This option is a needs based pick. The Raiders need help on the interior of their line and a player like McDowell will help Khalil Mack get to the quarterback. With a league low 25 sacks, the Raiders need pass rush help.Another player considered was Caleb Brantley, but I wouldn’t use a first round pick on a 2 down run-stopper.

McDowell has concerns about his motor but if the Raiders can keep him on track they will have a great interior rusher for years to come.

2 major needs for this Raiders team are at linebacker and in the secondary. The thought process behind this pick is “Why not get a player who can do both?”. Jabrill Peppers’ hype has skyrocketed him at one point, to the top 5 in the draft. Now he has fallen to late 1st, early 2nd and could be a Deone Bucannon type player for the Raiders.

The biggest concern I have for Peppers is his tackling and ball skills. The good thing for him is good coaches can teach those things. If Peppers can live up to the hype the Raiders could get the steal of the draft.
Option 4: Defensive Leader; Raiders select Jarrad Davis

The Raider need linebackers bad. I would love to see the Raiders land Dont’a’ Hightower but even then they still need more. Jarrad Davis was the leader of one of the best defenses in college football. If Davis can bring that leadership to the Raiders the defense should be better.

Last year the Raiders defense seemed out of it because they never really had a good quality leader on the team. With Hightower or Davis, they will have just that.

Option 5: Quantity over quality; Raiders trade back with Cleveland Browns

If none of these options are available, the Raiders may decide getting more talent is better than what’s available. In this trade the Browns get their 3rd 1st round pick for 2 2nd round picks. With these picks they can get all their needs.