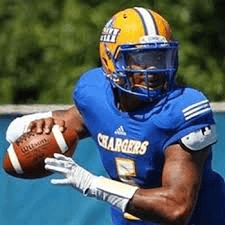 Shazzon Mumphrey is an athletic player with great arm speed.

The University of New Haven in West Haven,CT

Agreed that football is all about giving back, coolest thing i’ve experienced would have to be back in 2013. I had an opportunity to hang out with a kid that had an illness preventing him from being able to play the sport competitively, So going through the route tree throwing him Touchdowns was awesome.

My role model would have to be my father. My dad has always been my biggest supporter and critic. He taught me early to always persevere no matter the situation. Being that I’ve faced much adversity in my life I couldn’t be more thankful for the years of molding me into a man my dad put in.

I always played basketball even as a freshman in college.

I’m primarily a QB it was my first and natural position but I was put in the position to play Wide Receiver as well.

Playing Quarterback what separates me from others is probably the ability to learn fast. Having the intangibles is one thing but being able to put them to use and operate a system smoothly comes with a lot of practice to most. I’d say I’m pretty natural at it because of my football knowledge.

There is a number of things to look for when breaking down film. Id say start with personnel, knowing who is where and what they excel at along with areas that aren’t up to par. I like to see what the defense throws out in certain situations, down and distances and far as fronts coverages and blitzes. The most important thing is to know how to protect yourself at QB, if you can’t do that then you can’t run an offense.

Toss up between Artie Burns, Javon Hargrave and Shattle Fenteng.

I think I’m very comparable to Terrelle Pryor and B.J Daniels. Playing QB first and being natural at that as well as having the ability to split out wide and go make plays in the receiving game and blocking in the run game

Junior College was the biggest obstacle I had to overcome. When you’re and FBS caliber player coming out of high school but don’t qualify its a shameful feeling. Even more when you have to enroll at a community college and play a brand of ball that you aren’t familiar with and it’s kind of every man for himself. I just worked hard found the right place for me and lots of prayer I was able to come out of JUCO with many scholarship offers at the FCS level.

Besides prayer, no pregame rituals. I don’t even do the same thing every week. Some games I’m to myself listening to my music and others I’m very social with my teammates as long as we are focused up

My biggest Strengths are my work ethic and ability/willingness to learn and competitive nature. 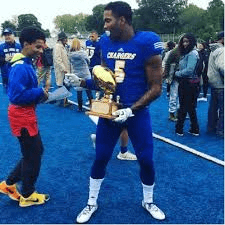 Whatever My Grandmother desires. Lord Knows She Deserves it.