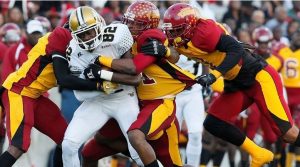 Quavon Taylor had to take a different path to stardom, but he never gave up

My Name is Quavon Taylor

My position is Linebacker

I play college football at the historical Tuskegee University

I’m co-founder of a organization in Miami entitled BikesUp-GunsDown. The Organization was formed to fill in the gap as a Mentor for the at risk youth in my community. We used Bikes as tools to promote health and as traveling Devices to tour the different neighborhoods and educate the children. Due to the high rate of Murders in Miami, the Misuse of Guns is a big lesson. The coolest thing I done off the field is the Miami lets Jogg for peace. I used the presence of My NFL friends Sean Spence, Devonta Freeman, Lavonte David and host of my other NFL friends to Jogg for Peace in our community after the back to back killings of 2 innocent young kids in our community, 6 year old King Carter and 10 year old Marlon Eason(Lil Merv).The effort was designed to bring every one together, the murders don’t only affect victims it affects the whole village. We prayed together, Jogged together, laughed together and discussed different Gun Prevention methods, I really witnessed my community setting aside the differences between each other and coming together.

The hardest College Class I ever took was taught by Dr. Lonnie Hannon Sociological research, it was challenging but I also learn a lot while taking the Class, Dr. Hannon is great teacher

My Role Model was a older Guy from my Neighborhood Name Mack-a-Do-Right.   Mr. Mack-a-Do put together A organization called The R.E.A.L team. The Organization was responsible for taking care of the liberty city village. Mack-a-Do was a father to a lot of kids in Liberty City. The R.E.A.L team fed the kids, helped out with tutoring , Bought kids school clothes , shoes, book bags and rewarded the kids with field trips for doing good. My first time ever meeting a Professional football players was through Mack-a-Do, Miami Legends Chad Ocho cinco and Edgerrin James. Mr. Do-Right was well respected in our community. Mr. Do-Right had the heart of gold he also knew how to get serious and take care of business. Rest In Peace Mr.Mack-a-Do Right ,He was my Role model.

I was into boxing growing up, That was the first sport I ever competed at. I learned the Boxing Sport from my father Robert Taylor. I caught on to boxing fast and I really liked it a lot . I completed in the kids junior golden gloves as a amateur my record was 4 wins 0 losses. My career was shortened when my father went to prison, with no one else to train me for boxing I turned to football that was the universal sport in my neighborhood.

When I was introduced to football The first position I ever played was offensive line and Defensive line. I had to earn my respect on the field. In Miami kids didn’t really want to play offensive line and defensive line ;in the trenches as my coaches would call it, those positions were frowned upon. At a young age everyone wanted to play skilled positions (Quarterback ,Running Back, Wide Receiver, Linebacker, Cornerback or Safety) I dominated the trenches , made a name for myself (Quavon The Hitman Taylor). Nobody on my team wanted to go up against me in practice so my coach decided to put the ball in my hand and see if I could run the Ball. I got promoted to running back ,I did real good at Running back until I hurt our starting Middle Linebacker. After that my coach told me Quavon now you have to learn the middle line backer position, that’s how I landed at the Linebacker position. My Coach taught me see ball get ball the rest was history.

My see ball get ball instincts separate me from most . It’s my effort that separates me as well. I Learned this game is more than just how fast you can run a 40 yard dash this game is predator and prey. The art of War, It’s all about want to . How bad you want to get to the ball and when you get there are you coming with bad intentions. If you research me through anyone who watched me play football from a kid up until now they would tell you I have a nose for the ball and I love to throw my weight around.

When Breaking down film the first thing I do is sort by frequency, which let’s me know the plays my opponent called the most. I always look forward to killing a teams running game first forcing them to be one dimensional where they have to pass the ball to win. Next I check to see if the opponents offensive line is balanced, then I find the strength and weakness on the offensive line, most teams love to run behind there strength they will run behind the weakness but I must defeat the will of there strength on the offensive line first. I go over the running playlist over and over until I get a feel of the Running backs and there tendencies. After that I check to see how good of a thrower am I facing. Then I go over 3 step and 5 step wide receiver combinations repeatedly to see how the team is trying to attack. I do these steps over and over until I know my opponent like the back of my hand. 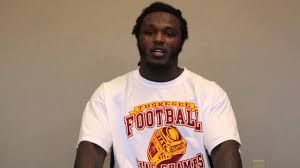 The toughest player I ever faced was Jasper Howard. A Real Dog on the field his Bark definitely matched his Bite. Had the ability to change a game up in seconds.

If I had to could compare my game to any player from the NFL it would be Zach Thomas he’s the example of how Linebacker is suppose to be played.

The biggest obstacle I had to face was growing up in Miami with out my father present in my life. Don’t get me wrong I had a wonderful grandmother and a great mother, truth of the matter it takes a Man to teach a boy how to become a young Man. You can’t bring kids in this world and be obsolete in raising them. That’s just like planting a seed and expecting some one else to water it for you, who knows if your plant will grow. I Learned a lot from not having my father present in my life, My Kids will never know what that feeling is. I was An ”A” “B” student through out high school and was the middle linebacker for the number 1 high school in the Nation , Teddy Bridgewater was our scout team QB we were that Good. My only problem was when I left school No money circulating at the time to help take care of my family. I picked up the guns and started Robbing. I would say I was 14 or 15 when I started Robbing people I was introduced by a older Guy from my Neighborhood . I thought I had my family fooled because I was still bringing home good grades. Warnings comes before self destruction. I remember it just like it was yesterday We were having our pep rally right before our game and the police came to my school hand cuffed me. I was taking to the police station where I was Questioned about a slew of Armed Robberies the police chief was a Alumni of my high school, mysteriously I was released. That was my warning . I went right back Robbing ,that’s what allowed me to play football with my team and not have to work to help my family out that’s what I made my self believe to help make feel better about the situation .Time passed by I got accepted to the University of South Florida going to school and practice ,typical student athlete . We went on spring break from school I had to pay our home taxes so I went out and Robbed I got caught that was March 18, 2009. I was booked and Sat 30 months until trial. I prayed day in and Day out .  I made a promise to God if he walked me out the Jail house gates I would never Rob another person again. I stuck to my word. 30 months later I Sat in front of a Jury they found me not guilty . I found Jesus that saved my life. All I can do is continue living for him Praising his mighty Name, Thank you Jesus.

Yes I do have a pregame ritual, before every game I get by myself find a Quiet place ;praise and worship my lord and savior Jesus Christ, without him I’m nothing .

My Strength is my leadership being able to play my role in order to get the Job done, My natural see ball get ball instincts , Playing Football is my strength; sacrificing my body for my teammates .

My 40 yard dash technique is my weakness every one has different ways of teaching it. I’m better at giving my all , emptying the tank I believe effort is something you can’t coach.

Hey, How’s it going ? My Name Quavon Taylor I’m a hard worker . I Love this game I’ll do anything to be apart of your organization. The game of football is war to me let me be a front line soldier for you. Allow me the opportunity to suit up and Prove myself. Thanks for your Time.

Sean Taylor was my favorite player growing up, My favorite NFL Team is the team that give me a opportunity.

The first Thing I would buy is a house for my Family.