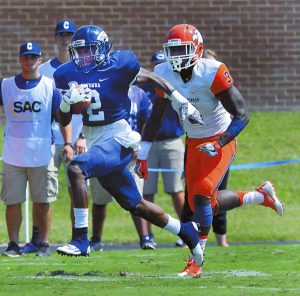 Case Woodard is a big corner with great ball skills.

My name is Case Woodard, II.

I am a Cornerback.

I would have to say it was one Christmas when my mother, sister and I went and fed the homeless in downtown Atlanta. We made sandwiches and other snacks in over 50 brown bags. The most memorable part for me was once it got late and a little colder outside, I saw a homeless man shivering after I gave him a bag of food and so I gave him the beanie off my head because he needed it far more than I did.

I would have to say Intermediate Spanish. Picking up that language and rules then speaking in it was extremely challenging for me.

I was born in Mt. Vernon, NY but I was raised in Lithonia, GA.

I would probably have to say Tyrann Mathieu for a few reasons. He has been through so much adversity throughout his college and professional career spanning from suspension to injury and everything between. He handles adversity with a savage mindset. He embraces it and takes it head on it.

Growing up I tried everything. I’ve played soccer, basketball, baseball, and track & field. I even was a skateboarder for a little while.

The only other position I’ve played was Safety. I played that position throughout high school and made the transition to Cornerback once I got to the college level.

My quickness. I spent a good amount of my life as a dancer (ballet, jazz, hip-hop, etc.) and those different movements translated to football. I’ve always had the best and quickest feet on every team I’ve been a part of.

History repeats itself so I look for tendencies. Not only do I watch the receivers releases, route running ability and ball skills. I watch hand signals and gestures between the receiver and his quarterback. I also look for route combinations out of different formations and what plays an offense like to run in certain down and distances.

I can’t really pinpoint one matchup that I’ve had and thought back like “man, he was tough”. I’ve played against guys that were fast, quick, big, small, strong…they brought different things to the table but I was always prepared from the film room and great coaching and I’m thankful for that.

Tyrann Mathieu. Like him, I’m not a big guy but I find ways to make plays and play with a passion for the game. I’m a student in the film room and I want to be the best every single play, including practice.

Being ineligible and out of school was my biggest obstacle. For the first time since I started playing, I spent an entire year off the field, away from team activities as a whole and out of school. It was my lowest point. My families support and continuous prayer is how I made it through. Instead of giving up on football and dropping out of school, God opened doors for me that I thought were closed forever. I was able to get back in a school and on the field the next year. Now I find myself training for the NFL Draft, it’s amazing how things unfold sometimes. 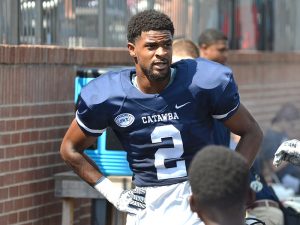 Sending up a prayer is the only thing that never changes on game day.

My ability to have short term memory. After giving up a big play, it’s important not to dwell on it but instead move on and be the best every “next play”.

My strength. I’m not the strongest guy on the field but I’ve been busting my butt to become stronger everyday.

I’m selfless. I want to help win multiple Super Bowls for as long as I can. I motivate others and play at a level that makes those around me better. I want to play my part in building and/or maintaining and a championship franchise.

My favorite team has been the Pittsburgh Steelers for as long as I can remember. I can’t truly pick only one player as my favorite; I’ve watched so many great ones. Growing up I played safety so my favorites were Sean Taylor, Ed Reed, Troy Polamalu and Bob Sanders.

Whenever I’m able, I want to buy my moms old house back. Growing up we had so many memories there and my siblings and mother all miss it so I definitely want to bring the home back to our family.