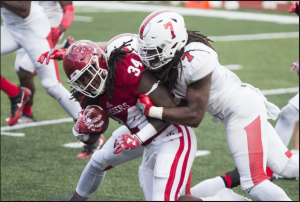 I’ve been doing community service since I was young but the most recent thing I’ve done is donate food and cleaning supplies to the Muncie Mission in Muncie Indiana.

My father, he was the one who pushed me to pursue my passion in sports.

I played basketball and ran track.

I played Running back and Linebacker when I was younger.

My physicality and versatility being able to play in the slot is what sets me apart from the rest.

I look at formations and tendencies as far as play calling in certain situations.

Marcus Lattimore my sophomore year of high school he was the most dominate player I have ever seen. 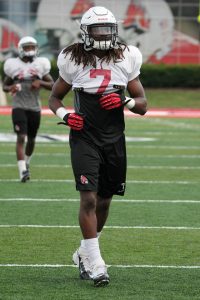 They’re not in the league anymore but Bob Sanders, Troy Polamalu and Brian Dawkins are guys I model my game after.

The biggest obstacle for me had to be when my family first moved to Georgia. I’m originally from Illinois and growing up I was the best athlete around. Once I moved to Georgia I had to step my game up or ride the bench. I rode the bench for a while until I acclimated to the speed of the game.

I almost always listen to slow motion by Juvenile it’s my favorite song.

My decisiveness on the field and the speed at which I play the game are my strengths.

I don’t have a lot of film playing safety after my sophomore year. There isn’t a lot of film of me in coverage at the safety position.

I am a sideline-to-sideline guy my effort getting to the ball is unmatched. I destroy blocks at the point of attack and make plays in the open field. I will be a physically imposing force in the middle of the field. Teams will be scared to run and throw the ball my way. I am an effective blitzer and can get to the quarterback. More and more teams are looking to the screen to get cheap yardage I can eliminate that from the nickel position as well as make plays on special teams.

Growing up so close to Atlanta the Falcons were my favorite team. My favorite player is Troy Polamalu he was the first of his kind to be so versatile from the safety position.