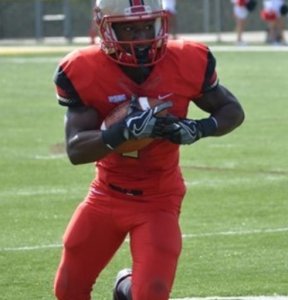 Draft Diamonds scout Brandon Davis wrote up this nice scouting report on Norman Darden, the wide out from Seton Hill

Athletic Ability: Darden is an athletic player with good straight line speed & acceleration. He is someone that’s agile enough to slip by a defender with decent elusiveness.  His speed allows him to be a threat when running vertically.  He has decent body control on jump balls and juke moves in the open field.

Hands: Darden has subpar ability when hauling in passes. He shows the ability to adjust to the ball, but tends to catch the ball more with his body than his hands.

Route Running: Darden is very raw as a route runner. He can run routes while lined up on the outside, in the slot, and in the backfield as a running back.  Rounding off his cuts seems to be his biggest issue in this area as he seems to rely more on his athleticism then skill.  He is a big play threat on deep routes & in the flats.  He’s not afraid to go for passes over the middle.

Run After Catch: Darden is effective after catching the ball. He can set his blocks to avoid defenders, and then shifts into second & third gear once he has space.  Not real effective when fighting through traffic.

Release: Press coverage for Darden seems to be an issue with his stature. When defenders play off him & give him a cushion, he shows that he can get off the line of scrimmage with a decent burst.

Toughness: Darden shows his toughness when catching passes over the middle. His durability will be a big concern for him at the next level.

Return Ability: Darden shows versatility to be used as a returner. He can follow his blockers despite outrunning them at times, but does have some vision to find open creases.  It all can be improved with reps.

Strengths: Darden is a player who brings speed, acceleration, and quickness to the table. He shows the ability to line up just about anywhere on the offensive side of the ball to be a threat.  Robinson has subpar catching ability, and enough heart to go for passes in traffic.

Weaknesses: Darden is undersized for a typical pro wide receiver or running back. He tends to bring in passes with his body more than his hands.  His route running ability is raw, and his effectiveness against press coverage is unknown.  His durability will be a concern at the next level because of his size, and due to sitting out the entire 2014 season due to injury.  His production will be questioned after playing against Division II talent.

Summary: Norman Darden was a versatile weapon on offense for the Seton Hill Griffins. He ended his career at Seton Hill with 91 receptions for 1,224 receiving yards and 14 total receiving touchdowns.  At the next level, Darden looks to be most effective lined up in the backfield, slot, or as a returner.  He has good speed & acceleration in space, with enough agility to be pretty elusive.  Passes in the flat & deep routes are where he can be effective as a receiver.  He shows the toughness to go over the middle for a pass.  His route running ability & cuts will need to improve to be more effective.  His stature at 5’7” & 160lbs. will bring questions about his durability, especially after missing his junior season in 2014 due to injury.  Right now, I see Darden as an UDFA who could be used in a role similar to Philadelphia Eagles Darren Sproles, or CFL star Brandon Banks.