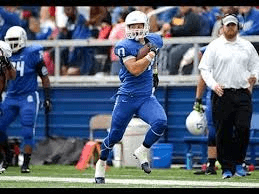 Athletic Ability: Shegos is an excellent athlete with sneaky breakaway speed, but is more quick than fast. He is a type of player who can burst and accelerate in the open field, and can be pretty unrelenting when fighting for extra yards.  He can separate from a defender on short and deep routes.  With his NFL type size, he can fight off defenders at first contact.

Hands: Shegos has good hands, and shows the ability to use them at will unlike others who catch the ball with their bodies more times than not. He shows the ability to adjust to the ball, and make a catch against defenders draped on him.  He seems to be dangerous on short & intermediate routes against zone coverages.

Route Running: Shegos is an okay route runner who has the ability to run each route from the route tree, but isn’t the sharpest when coming out of his breaks. He is a big play threat on short & intermediate routes where he can fight for more yards.  He shows that he can excel running routes against zone coverage, but not quite as much against man coverage.

Run After Catch: Shegos shows his heart & desire after catching the ball. He can fight off the first defender almost consistently, and can take on more of them at will while gaining more yards.  In the open field, his quickness allows him to turn short gains into long gains.

Release: Press coverage doesn’t seem to be a big issue with Shegos. He can get off the line pretty well when jammed, but it’s getting separation from his defender in man coverage that he’ll have to work on.

Toughness: Shegos shows determination, toughness, and will when fighting for extra yards. He isn’t afraid of contact, and will take on multiple tacklers if needed.

Return Ability: Shegos shows that he is versatile to be used on both kick & punt returns, not just as a returner, but also as a gunner. He shows the ability to follow his blockers, and can gain extra yards on returns, but needs to show that he can turn those returns into scores.  With time & reps I think he can show that.

Strengths: He’s a player who plays the game with determination, quickness, and sneaky speed. He shows the ability to line up outside, and in the slot.  Shegos has good hands, and has the ability to fight for more yards after the catch.  With his good size & production, he’s a very competitive player on offense & special teams.

Weaknesses: While Shegos does have the size of a typical pro receiver, he still needs some fine tuning. His route running is good, but he needs to be more sharp when coming out of his breaks.  He doesn’t show too much ability to get separation from his defender against man coverage.  Like most pro prospects at the lower levels, like Division II, his level of competition that he played with, and against will be looked at a lot.

Summary: Mitchell Shegos was a productive for the Notre Dame College Falcons. A 2016 Academic All-American who ended his career with 284 receptions, 3,580 total receiving yards, and 34 touchdowns.  He held in at least one pass in 33 consecutive games.  During his sophomore season, he tied an NCAA Division II record with 23 total receptions in one game.  Shegos looks like he could best be used in a Wes Welker or Julian Edelman type role as a receiver at the next level.  He has good size, good quickness, and great ability to turn a short play into a big play with the way he fights for yards after the catch.  Short & intermediate routes are where he looks to be the most effective.  He shows the toughness to take on defenders, and has good hands to haul in most passes.  His breaks & cuts will need to improve, along with his ability to separate from his defender against man coverage.  He has the size of a pro receiver, but will need to show that he can be productive at a higher level after playing with & against Division II talent.  Right now, I see Shegos as a player that an NFL team would consider drafting in the 7th round.  If he isn’t drafted, he would more than likely be brought on as an UDFA.