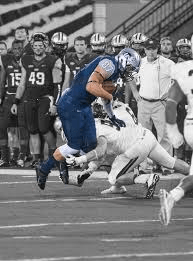 Helped coach summer football camps for kids grade 4 and up

Ladainian Tomlinson because of the way he played the game of football and because of his character off the field. Never put himself first, was always a team player.

In high school I played OLB, and in college I also long/short snap

Definitely my blocking in the run game, and my ability to catch the ball in traffic

I start by watching the DE/DT alignments pre-snap, looking for indicators of blitz or twist then study their pass rush moves to see what they do a lot. Then I watch the coverages, looking at the safety’s/corners pre-snap and post-snap alignments. I pay particular attention to the leverage that LB’s and DB’s play in certain coverages.

Gronk minus the injuries. Everyone knows he can catch and run with the ball, but he’s basically another offensive lineman when it comes to blocking in the run game. His style of play is physical, and he doesn’t shy away from taking the hit if it means he’s going to catch the ball.

Not really. I listen to the same kind of music before every game and just dial myself in.

The level of competition that I’ve played against is not quite that of the FBS, so I need to prove that I can line up against anyone and still play my game. 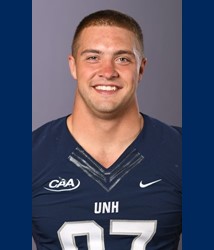 My knack for catching and holding onto the ball. I’ve never turned the ball over whenever it was in my possession.

I’m going to say making people miss after the catch.

I am an extremely hard working and determined football player. Anything that is asked of me I will try to the best of my ability to accomplish. Give me the chance and I wouldn’t disappoint.

The Chargers because of LT. Amazing player on and off the field.