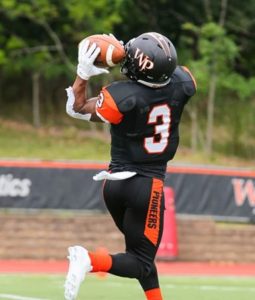 Athletic Ability: Robinson is a good athlete with good speed. He is a type of player who can stop & start up again rather than burst or accelerate.  With his speed, he can eat up a defender’s cushion on go routes.  At his size, he has good body control when challenging for a jump ball, and when performing double moves on multiple routes.

Hands: Robinson has decent hands despite not always attacking the football, and instead waits for it to come to him. He shows the ability to adjust to the ball, and make difficult catches against bigger defenders.  He seems to be dangerous on deep routes and stop & go routes.

Route Running: Robinson isn’t the best route runner, but he shows that he can run most routes from the outside, or the slot. He is a big play threat on deep routes & screens.  He can find the holes in zone coverages, but he runs through them instead of sitting down in those holes.  He isn’t afraid to go across the middle for a pass in traffic.

Run After Catch: Robinson shows his elusiveness after catching the ball. He can shake the first defender more times than not on short passes, and his ability to change directions can turn a short gain into an exciting and/or long play.

Release: Press coverage seems to be a big weakness for Robinson at his size, but can be improved with time. When defenders play off of him, he shows that he can get off the line of scrimmage pretty well.

Toughness: Robinson shows heart, toughness, and courage when catching passes in traffic, whether it’s a jump ball, or going across the middle. He isn’t afraid to go up to take a ball away from a taller defender, or haul in a pass with a defender on his back.

Return Ability: Robinson is athletic & versatile to be used on both kick & punt returns. He shows the ability to follow his blockers, but doesn’t find the creases quickly to turn a long return into touchdowns.  It all can be improved with time & more reps.

Strengths: He’s an athlete who plays the game with courage, good elusiveness, and quickness. He shows the ability to line up outside, and in the slot.  Robinson has decent hands, and the fearlessness to challenge for the football on contested jump balls, or across the middle against zone coverage.  Despite his size, he’s a competitive player on offense & special teams.

Weaknesses: Robinson doesn’t have the size of a typical pro receiver. With his height, he isn’t a red zone threat.  He waits for the ball to come to him instead of attacking it on short & intermediate routes.  His route running isn’t the sharpest, and he can be slowed down quickly against press coverage.  Despite not showing much of a history with injuries, his risk of injury is high at the next level because of his size.  His level of competition that he played with, and against at the Division III level is also a concern.

Summary: Malcolm Robinson was a 2-year starter for the William Paterson Pioneers after transferring from Montclair State. He ended his career at William Paterson being ranked 2nd in yards per reception (17.6), 7th in all-purpose yards (2,269), and 9th in offensive touchdowns (16).  Robinson looks like he could best be used as a slot receiver, and as a returner at the next level.  He has good speed, good body control, and great elusiveness to turn a short play into a potential long play.  Screen passes & routes with double moves, especially stop & go routes are where he looks to be the most effective.  He shows the toughness to go for jump balls, and to go across the middle in traffic for passes.  His releases & route running ability will need to improve.  His size will be looked at extensively by all teams, along with his ability to adjust from playing against Division III level competition to pro level competition.  Right now, I see Robinson as an Andrew Hawkins or a Dexter McCluster type player that an NFL or CFL team would consider bringing into training camp as an UDFA.  With a tremendous combine/pro day, his status can improve.