Tevin Creeks is a big time playmaker that transferred from Sam Houston State.

Help Host a summer football camp at my high school for kids.

My mother. Because of the sacrifices she took too raise me, my brothers and sister.

I played Wide Receiver in high school and at Blinn Juco College , then switched to Cornerback when I got to Sam Houston.

I think my length, with my long arms and the ability to press and jump up with WRs.

See if they have favorite WR/s, Look at WRs against press and off,  WRs Favorite Routes (deep and short), Route combinations by the WRs, QB steps (3 or 5), and look for checks from the QB/WR and slide-line.

I would say Kevin Johnson, with the long athletic play style and being able to use hands at the line. 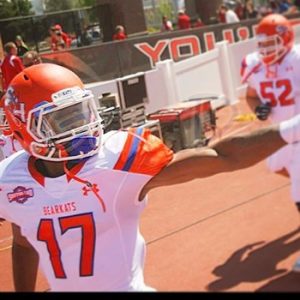 My little cousin Artreal Jones passed away during a basketball practice before going to college in the summer of 2014. I took it as a sign, “how bad do you want it?” Because his heart stopped while he was practicing in the gym with a teammate and I overcame it by letting his death motivation me throughout life.

Being able to press physical at the line and run.

I’m a great teammate and competitor, I have the ability to guard big/tall WRs, and I’m a quick learner.

My Favorite player growing up was Peyton Manning and the Colts.

First thing buying my old neighborhood and remodeling it.