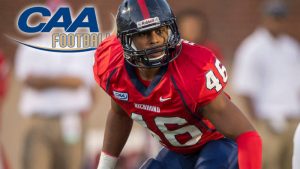 Football is about giving back, what is the coolest thing you have done off  the field?

I worked with kids at a YMCA in Richmond.

Elon Musk because he is highly successful, environmentally conscious and steadfast in his values.

I played organized soccer, baseball, and I wrestled

I think what separates me from others at my position is my ability to move well in space, as well as an above average understanding of how and why every player on the defensive fits into the scheme

When I breakdown film what I look for is the offenses tendencies in game situations, specific formations that indicate plays to be alert for, individual player tendencies that send a red flag of what is coming.

I would compare myself to Lavonte David because we are similar size, we play in a similar fashion, and we play with a similar level of intensity.

I think the biggest obstacle coming from FCS is the reputation of lesser competition compared to the FBS level.

My greatest strength is my coachability I think that I take criticism and coaching and implement into my game. 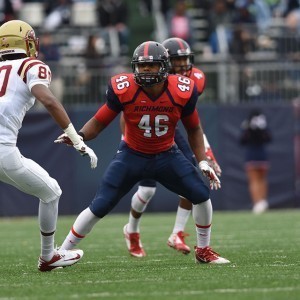 I would say that I’m a extremely durable player who will do whatever is asked of me to help your team win games and if given the opportunity I will make the most of it.

My favorite team growing up was the San Diego Chargers.

I would have dinner with George Washington, Morgan Freeman and Jim Brown

I would buy Stock in an ETF fund