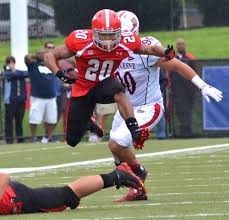 The coolest thing I’ve done off the field had to be time spent with youth, to inform them on the importance of tomorrow being a result of today’s decisions.

The hardest College class I have ever taken may have been “Communication Theory”.

My mother is my role model. She taught her children how not to blame your circumstances for an outcome, but make the most of what you have, and possibly create a better outcome.

Growing up, I played basketball, baseball and ran track in addition to football.

I also played DB, coming up.

What separates me from others is my ability to utilize my strengths against my opponent’s weaknesses, as well as having the confidence to never second guess a decision made while on the field.

While breaking down film, I look for defensive player’s tendencies, such as their run fit, how well they play their rules, leverage when approaching a ball carrier, and how well they move.

The toughest player I ever faced may have been Nicholas Grigsby, who’s now with the L.A Rams. He seemed to just have a nack for where the ball was.

If I could compare myself to one player, it would be Jamaal Charles. Studying his game, and the characteristics he brings to the table, I feel our decision making is very similar. He’s a guy with great speed, but not the biggest frame, and he takes advantage of his ability to beat guys without wasted movement.

My only pregame ritual is Prayer.

As a small school football player, I feel that I do have to stand out ten times more than a guy on a larger stage, due to the fact that he’s being noticed even when hes not the focal point. The bigger stage allows guys to have “first dibs”.

My biggest strength is refusal to fail.

My biggest weakness is failing to realize that it’s alright to make mistakes. My expectations for myself sometimes gets in the way of everything I’ve accomplished and plan to do so further more.

If you were a GM, I’d tell you “Sir, all I’m asking for is an opportunity. I’ll rise to the occasion.” Then I’ll do just that. 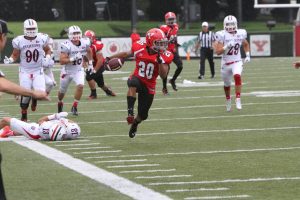 My favorite player coming up was Michael Vick, but I was an Indianapolis Colts fan.

If I could have dinner with three people dead or alive, I would choose my daughter, my grandmother, and my nephew.

With my first NFL check, there are many things I hope to one day soon be able to purchase, but the amount of my check is what would determine it all.