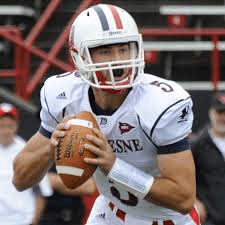 Dillon Buechel is a monster at the QB position. He has been dominating for years at Duquesne

During this past fall camp, a group of the seniors went to a local daycare and hung out with a bunch of young kids for a couple hours. We were out on the playground with them most of the time.

My parents, Herman and Janice, because of all the hard work and sacrifices they have made for me both athletically and academically

I have not played any other positions in football

I think the one thing that separates me from others at my position is my intelligence.

The first thing I look at when break down films are what fronts the defense will play, they look at their top coverages and then get to their pressure looks and blitzes.

The biggest obstacle I had to overcome in my football career is probably being under weight. I’ve worked hard over the past few years in the weight room and with meals to try and get as big and strong as possible. That way I can be as durable as possible on the field. 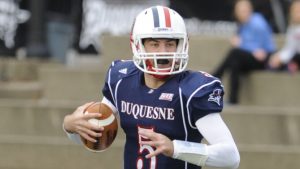 I do not have any pre-game rituals.

I think my biggest strength is my intelligence and composure on the field.

I think my biggest weakness is trying to be overly aggressive on some throws.

I would say that I’ll come in and do everything that I can to make the team better, regardless of my role.

My favorite team is the Pittsburgh Steelers.

If I had the financial ability to do so, I would buy a Range Rover.