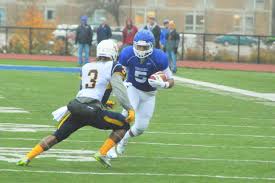 Dante Edwards of Concordia University is a big time threat at the wide out position.

In my years here at CUW, I’ve helped raise a couple thousand dollars that goes to research for breast cancer. Also, I’ve been a part of youth camps held on our field for the kids in our community.

I would have to say my political science class was the toughest class I’ve had to take. We touched on a lot of things I had no idea about, but I was better for taking the class in the long run.

I would have to say my father is my role model. He’s a blue collar guy that has worked for everything he has. I’m thankful that he raised me with the same values.

When I was younger I played basketball no ran track.

I played cornerback and safety in my early years of high school but stuck with wide receiver from my junior year on out.

I would say my aggressiveness on the field. Whether it’s blocking, running with the ball or catching it, I think I do it with an attitude.

The toughest player I’ve faced was #7 from Augsburg College. He was only 5’10” and 170 pounds but he was really physical and extremely assignment sound.

I’d have to say Ezekiel Elliot. He’s a guy that looks to make a big play ever time he touches the ball and he never shies away from a hit, no matter who it is. I feel like I bring some of that to my game but it’s just out at the wide receiver position. 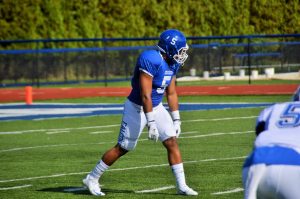 I think that sometimes it’s very humbling knowing you’re at a small school and that your accomplishments and numbers won’t be as recognized as they would be if you were at a big time school.

My biggest strength is that I don’t go down easy.

My biggest weakness would be that I have a tendency to do too much when we’re down in a game. Things such as cutting my routes a yard short trying to get open quicker or trying to extend a play and end up losing yards.

I would say that all I’m looking for is one shot. Whoever gives me my one shot will get everything I’ve got. I’ve imagined of this since I was a child and I plan on taking advantage on my opportunity and make everyone pay that didn’t give me a chance.

Dez Bryant and the Dallas Cowboys.

I would set my parents up with somewhere nice to stay. They deserve it for everything they’ve done for me.