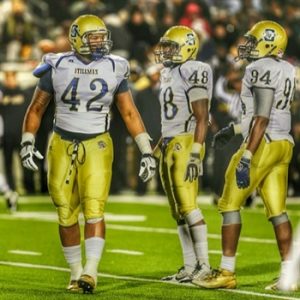 I’ve worked with former professional football players with football camps for the youth, also when the tornado hit my hometown I helped with my former high school by donating clothes and food to help the homeless people.

My mother, because I watched her be a worrier and a hard worker as I came up. I watched how she overcame so many obstacles with raising four children with the help of my grandmother, that’s why she’s my role model.

Basketball when I was younger, soccer, and track when I was in high school.

Not only can I be a force on the run but I can also rush the passer.

I look at the splits of offensive lineman, what plays they like to run, then the percentage rate of passing/throwing, and what they do on certain down and distance.

Aaron Donald we are similar in size; not only can he stop the run but he can rush the passer

Growing up without a father. I watched guys in the church and school who I felt could possibly have a positive impact on my life and took notes. The rest is history.

Prayer is a major role before I approach any game following that I have my playlist ready with a few gospel songs leading up to some upbeat hip-hop.

You’re getting a hard working young man who’s humbled and passionate about whatever role I am blessed with.

My family a home.