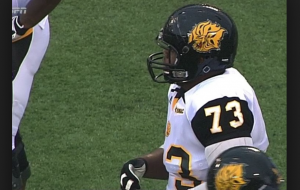 Terrance Knighten is a very solid interior lineman. After spending three years at UAPB he is finishing off his career at North Alabama.

Football is about giving back, what is the coolest thing you have done
off the field?

The coolest thing I have done to give back was ref the special Olympics basketball tournament in Arkansas . It was a very fun time getting to react to the kids and actually converse with some of them before and after games , it was truly a great experience .

The hardest class I have taken is Microeconomics

My role models are my father , mother and my uncle . They work extremely hard and have never quit in almost anything I’ve seen them take on . It inspires me to do the same and make them proud .

I played basketball before football and thought I was really good. I had decided to pursue football because I always fouled out while playing basketball .

I think my technique is my best attribute , I try my best to break down my game into fundamentals and improve each one at a time.

I’m looking for tendencies when I look at film , how the tackles is lined up in front of me , does his hand and foot placement guide him to one gap , does he always line up in the same stance on every play

The toughest player I have ever faced has to be Antwan Woods currently on the Tennessee Titans back in high school. It was my first year in varsity and it was his senior year already committed to USC at the time.

If you could compare your play to one player in the NFL who would it
be and why?

I’m not really sure who I would base my game around , I really just try to mimic some of my favorite players such as  Jahri Evans and Larry Allen. I haven’t seen much film as I would like to on him but John Hannah is someone I really enjoyed watching clips of him on youtube.

My mom has a bottle of holy oil she prays over for me before each season and I usually pour some into my hand each game and I pray over myself . 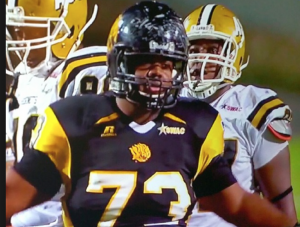 I feel like two of the biggest obstacles are being overshadowed and the feeling of not making it out because of recognition. A lot of praying and pep talks are needed in order to boost belief in one self and drizzle the opportunity if presented and create one if not.

I think my biggest strength is my pass pro . After a few snaps and breakdown of film I’m able to slow the game and the lineman ahead of me down .

I think my biggest weakness is my pad level . Have to improve to be able to play in this game that requires you to be low.

I feel like there is something that I can always work on and I am willing to put my maximum effort in to do so . With opportunity comes great responsibility and you can count on me to be that person .  I have great potential that can push me into becoming something great in your organization.

My favorite player is Shaun Alexander and team the Seahawks. I also loved Big Walt on the team as well. I just loved the way he ran the ball and just caught an interest in their team from the start .

With my first NFL paycheck I’d put half of it away and after necessities I’d invest the rest .