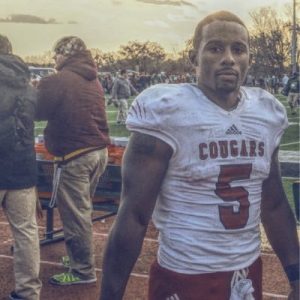 Rashad Lofton has juke moves like Madden for the XBox. This kid is tough

As a team, we all went and created food bags for the non-profit organization “Feed my starving children” which was sent to high poverty countries.

I am from Detroit, Michigan

My father is my role model! He has always taught me to be positive and believe in myself and my abilities and I credit his teachings for my upbringing.

Yes. growing up baseball was my first sport, I was a first baseman and pitcher.

Running back, defensive back.

I am very confident in my play. My route running techniques and Elusive abilities after catch makes it hard on defenders to stop me.

In regards to film while in slot position, I look for the defensive triangle from corner to safety to linebacker. I look for their alignments on certain coverage’s, I look for common tendencies that I can expose in the game.

Darrius Phillips, who is a WR at WMU.

Julian Edelman of the Patriots. I feel that I can run and cut through my routes and I have great hands just like him. We both have the elusive abilities after the catch.  We both are punt returners as well.

I like to shower before games, I like to feel comfortable and being cleans make me feel that way.

As a small school football player, what obstacles do you feel you have to overcome?

I feel that I have to overcome the obstacles of being discovered and getting more exposure and not having the equal opportunity the athletes at bigger universities have. It is very hard to make it somewhere without a support system especially when you don’t know where to start.

My mindset. I remain strong and focused no matter what. And I make it my priority to give it my all and never be satisfied.

My blocking technique. I sometime over pursue and get undercut.

I would say I will do whatever is needed to win a spot on the roster. My main goal is to come in compete and do whatever is needed to make the team better for team success on and off the field. Also, I would say that I would like the chance to come and demonstrate my ability against the best already on the team and entertain him. I want to be a part of the best team, along with becoming the best receiver in the league.

Favorite player growing up was Michael Vick I had his shoes, his jersey, and bought Madden when he was on the cover for 2004.

I would have dinner with Jerry rice who is known to be one of the best/ hardest receivers of all time. Talking to Rice will allow me to get more insight on crafting my abilities and enhancing work effort/receiver knowledge. Deion sanders to learn from one of the best defensive backs to ever play the game, the different tricks and tools DBs might use to attack me. Lastly, Tom Brady, A receiver is so dependent on his quarterback, it’s only right to meet and talk with him because he has played with some of the top receivers in the sport of football. Also, he has so much knowledge about how I can connect quickly with my quarterback.

With your first NFL paycheck, what would you buy?

Whatever my mother needs/wants, she deserves it.