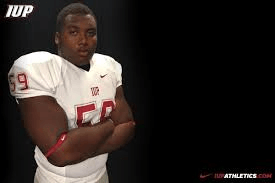 Ethan Cooper of IUP is the real deal. He will be in the NFL for sure next season

I play Guard as well as Tackle

Every year we go to the local elementary schools on Read Across America Day and read to the kids and they’re always excited to see us come in and interact with them.

My role model is my grandfather because he’s always had my back and he’s just always carried himself like a man should and takes care of his family and I hope to be like the man he is.

Growing up I played basketball, baseball, and in HS I did Track and Field

My tenacity and refusal to be beat and accept failure

I look for stance/alignment, LB position and blitz coming off of that. I also look at the safety structure and corner position in case of boundary and field blitzes

Karon Gibson who also played here. His motor was ridiculous and his technique was flawless.

I always listen to the Friday Night Lights movie soundtrack and just visualize dominating the opponent lining up across from me every play.

I feel the biggest obstacle is just getting your name out there and getting people to understand that you are a real ball player. People tend to automatically assume because you play at D2 that the competition isn’t as good and that you’re not as dominating a player as you really are.

Body quickness and point of attack off the ball

Over critical of myself and mistakes I make 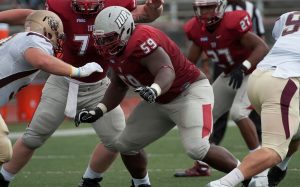 Michael Jordan, Muhammad Ali, and Kobe Bryant. The mentality they had in their sports and refusal to not be the best is what I try to emulate