Did Tom Brady have the same intentions as Kaepernick by not wearing NFL Logo on helmet?

Did Tom Brady have the same intentions as Kaepernick by not wearing NFL Logo on helmet?

Pro Football Talk has been all over the Colin Kaepernick case and they asked the question last week to the NFL, if a player removed the flag from the back of a helmet, what would the NFL do?  The NFL responded by saying:

League spokesman Brian McCarthy tells PFT that players are not permitted to remove the flag decal that appears on the back of every player’s helmet.

The rule likely has more to do with the NFL’s insistence of uniformity, especially since the NFL does not require players to stand for the anthem. The league wants all players to look and dress the same, with limited exceptions tied to breast cancer awareness games in October and the Salute to Service every November.

Well, it looks like Colin Kaepernick is not the only quarterback that needs to be scrutinized. The man that was suspended by the NFL for the first four games did not have the NFL symbol on his helmet for two games according to PFT.

As you can see on Martellus Bennett’s helmet here the NFL Logo is on the left side.

Now let’s look at Tom Brady’s helmet, shall we? 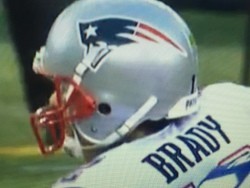 It is clearly missing, so what will the NFL say about it?  Well they responded to Pro Football Talk: 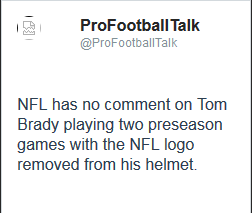 So will there be any action? I want to know your thoughts?