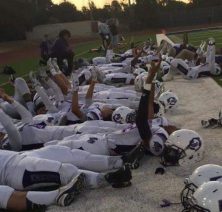 With Colin Kaepernick in town for their football game, the Castlemont High School protested along side the NFL star.

It has shed some light on the topic, but it is not slowing down the problem. In light of recent shootings of African-American men by police officers in Tulsa, Oklahoma, and Charlotte, North Carolina, the high schoolers decided they would make a stance. On Friday night, Kaepernick was in Oakland at Castlemont High School, where he took a knee during the anthem while the Castlemont players laid on their backs with arms up.

Kaepernick came to Oakland, CA. He kneeled on one knee, players laid on their back with hands up during the Anthem.