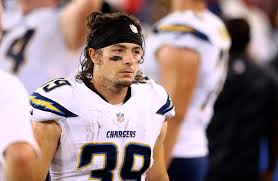 Chargers RB Danny Woodhead is lost for the year

Injuries were bad this week.  We wanted to update our Fantasy Football fans what happened this week. It was bad.

Panthers running back Jonathan Stewart suffered a hamstring injury early on during the Panthers’ win over the 49ers.

According to Seahawks coach Pete Carroll, Thomas Rawls, whose 2015 season ended with a broken ankle, injured his lower leg.

Chargers’ gritty running back Danny Woodhead was carted off the field Sunday with a torn ACL. His season is over.

Buccaneers’ running back Doug Martin suffered a hamstring injury in the team’s blowout loss to the Cardinals.

Lions running back Ameer Abdullah suffered a foot injury and didn’t return to the game after his initial exit. He is getting a second opinion today, it could be bad.

Arian Foster, who’s dealt with plenty of injury issues during his Texans career, suffered a groin injury in his second game with the Dolphins. The severity is unknown.

Adrian Peterson the Vikings star running back suffered a torn meniscus. He could return, but that is still yet to be determined.

Quarterback issues are also striking this week for some teams.

ESPN NFL Insider Adam Schefter reported Browns QB Josh McCown will miss the team’s Week 3 game versus Miami, as his shoulder injury sounds like something more serious than soreness or a bruise.

Patriots Jimmy Garoppolo had his right (throwing) shoulder rammed into the turf as he took a big hit from Dolphins LB Kiko Alonso in the second quarter. He will not play this week.

Everyone else that suffered a big injury….

Falcons WR Julio Jones suffered a calf injury. He will be sore, but is likely questionable for this week.

Raiders DB David Amerson came up with another big interception for the Raiders on Sunday, but he left the game with a head injury late in the fourth quarter.

Colts wide out Donte Moncrief will undergo an MRI on his shoulder this week for an injure shoulder after he took a huge hit from T.J. Ward.

Jaguars starting offensive lineman Kelvin Beachum suffered a concussion. He is in the concussion protocol.

Packers DT LeRoy Guion suffered a sprained MCL in the second quarter against the Vikings.

Seahawks WR Doug Baldwin tweaked his knee in the second quarter Sunday, when he was blocking with his back to the line of scrimmage and got his leg rolled up on from behind. He is undergoing an MRI right now.

Lions pass rusher Ezekiel Ansah left the game on the third snap and did not return to the game (ankle).

According to ESPN Browns reporter Pat McManamon, Browns starting center Cameron Erving suffered a bruised lung and was released from the hospital on Monday morning.

Lions Kyle Van Noy and Antoine Williams both left the game early. They have 2 linebackers on their roster.

Saints CB Patrick Robinson should be fine after a very scary play where he laid motionless on the ground.  The Saints are banged up in their secondary.

Colts CB Darius Butler injured his hamstring on a play last night that should have been a pick six.