First round prospect Tim Williams of Alabama was arrested 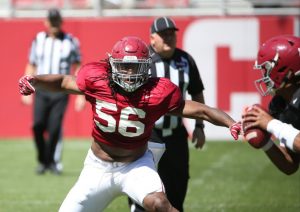 Tim Williams the star linebacker from Alabama was arrested early this morning and charged with carrying a pistol without a permit. Williams was arrested in the Tuscaloosa Publix parking lot around 2:00 a.m., according to AL.com.

Police officers were doing a normal patrol when they smelled marijuana coming from Williams’ vehicle. A passenger, who was not an Alabama football player, said the marijuana was his, but the officer then found the pistol under Williams’ seat while searching the car, according to sources.

Williams’ bond was set at $300. Williams is projected as a first round pick.