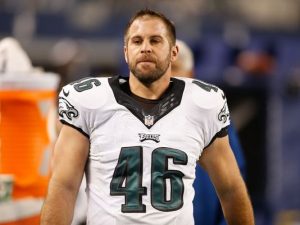 Jon Dorenbos has advanced to the finals of AGT

Eagles long-snapper Jon Dorenbos’s Tuesday night semi-final trick on America’s Got Talent,” involved a football, a diary, a lock box, a map of the United States and four state quarters. Dorenbos has been doing magic for a long time, but says this is an opportunity of a lifetime.

So excited and honored to be representing in America’s Got Talent #agt finals. Thank you Philadelphia Eagles https://t.co/aVWlQVr4gB

“Thank you, America,” Dorenbos said after being voted through to the finals. “This is the greatest opportunity ever.”

Dorenbos will compete in the finals Tuesday, September 13 on NBC.