Will Mark Sanchez’s fumble issues result in him losing the starting job? 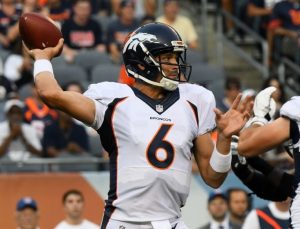 Mark Sanchez hopes he can win the starting job in Denver

The Denver Broncos have a tight race at the quarterback position between Mark Sanchez and Trevor Siemian, but neither of them are really taking advantage of the opportunity to be the guy.

Trevor Siemian threw a pick six on Saturday and Mark Sanchez fumbled the ball twice. Mark Sanchez feels those fumbles could cost him the starting gig in Denver.

“It’s difficult playing like crap on two plays and ruining an opportunity. That’s difficult,” Sanchez said after the game.

“No doubt, I thought I came in, we had a lot of energy, moved the team right down the field, two drives of 70-plus yards and we’re rolling,” Sanchez said. “Going into my eighth year, I know better. I know I’ve got to get the ball out. I know I can play this game, and I know I’m better than I showed [Saturday]. . . . Two really bad plays that took away from a great performance and potentially winning a job, so that’s really too bad.”