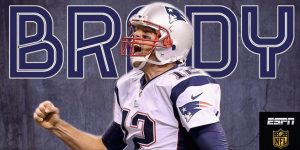 Tom Brady has been in more Championship games than 27 teams

Many thought Tom Brady would fight the NFL until the wheels fell off but that was not the case.  The 39 year old quarterback decided to just take the four game suspension and move on with his life.  He spoke to reporters about it, and said it was a personal decision for him to move on and put it behind him.

Tom Brady addresses reporters for the 1st time in camp. Calls it personal decision on not pursuing legal options. pic.twitter.com/xDCZdb0aNI

“I think it’s just personal. I’ve tried to move on from it,” Brady said, via CBS Boston. “I try to, like I said, focus on the positive and being here with my teammates and getting better. You don’t want to go out and do anything but try to be a great example for your teammates, and we’ve got a lot of competitive guys that have been out here on the practice field. And I think that’s where the focus needs to be.”

I have a feeling Brady is going to play pissed this year.  If that is the case watch out, because the last time he played pissed he almost won every game and the Super Bowl.