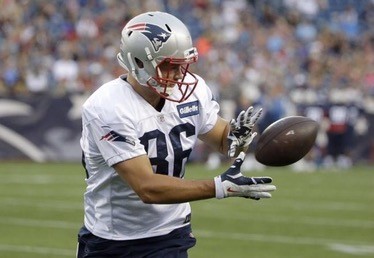 FOXBORO, MA. — Two preseason games down, and two more to go. The New England Patriots beat the Chicago Bears 23-22 Thursday night at Gillette Stadium. The Patriots are now 2-0 in the preseason, but that doesn’t mean anything at all.

As the month of August rolls on, players are expected to improve. After all, there are only so many roster spots open. There were definitely a lot of positives from last nights game, as well as a few disappointments. Here’s a few guys who stood out, as well as some guys that took a step back:

The 2015 sixth-round draft choice out of Arkansas continues to look impressive. Last night the converted quarterback to tight end totaled six catches for 71 yards and one touchdown, giving him a total of 9 catches for 118 yards, and a touchdown in two preseason games. Obviously Rob Gronkowski, and Martellus Bennett are the starting tight ends week 1, but Derby is making a great case for himself.

I’m still tempted to put him under my disappointments section, but he did look better last night. He got off to another slow start, and threw a couple of passes that he likely regrets, but he did finish the night 16 of 21 for 181 yards and a touchdown. It seems like Garoppolo just needs to get into a groove and complete a few consecutive passes. The offensive line did a decent enough job to prevent him from being sacked, and more importantly, Garoppolo did not turn the ball over.

Making his debut on the field, I’d say overall Chris Hogan was impressive. He looked like he belonged on the field. He finished the night with 4 catches for 53 yards, and added a two-point conversion. His one downfall was a holding call that wiped away a first down. It’ll be interesting to see how Hogan looks during the regular season, could be a hidden weapon in this offense.

What’s one thing that gets you in Bill Belichick’s doghouse? Turnovers. Bolden fumbled the ball at the Bears’ 3-yard line early in the second quarter for the team’s only turnover. Given the fact the running back depth is weak, Bolden may still make the team, but if he keeps putting the ball on the ground, don’t be surprised if he ends up cut.

Honestly, I might just keep listing him as a disappointment until he gets cut. What does Aaron Dobson really do? He finished the game with 42 snaps, which is the most out of all the wide receivers that played, and all he came up with was one reception for 10 yards. AJ Derby has made more highlight catches in 6 1/2 quarters of preseason play than Aaron Dobson has in his entire career.

Granted it’s only the preseason, and the defense was missing a few key guys like Jabaal Sheard, and Logan Ryan, but as a unit, they made Jay Cutler look like a top 5 quarterback. Cutler marched right down field, and jumped to an early 11-0 lead in the first quarter. Containing Alshon Jeffrey is easier said then done, but Justin Coleman was no match for the stud receiver. The defense let the Bears put together an 11-play, 64-yard touchdown drive on their second possession. It certainly wasn’t the performance defensive coordinator, Matt Patricia was looking for.