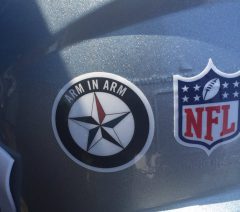 According to Clarence E. Hill, Jr. of the Fort Worth Star-Telegram, the NFL won’t allow the team to attach the Dallas Police Department decal to the back of its helmets for the preseason.

The Cowboys unveiled the decal during a ceremony with Dallas city and police officials on the first day of training camp as a sign of unity and solidarity following the tragic shootings of five police officers last month.

Jones said the team respects the league’s decision and its strict uniform policies.

The Cowboys had hoped to use the decals to show solidarity with the police department as well as the community.

I want to know how you all feel about this? Do you agree with the NFL’s decision?