How is Josh Brown’s situation any different than Ray Rice’s at this point? 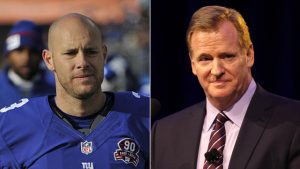 I am so confused today, because this phenomenal report conducted by Seth Waldman of the NY Daily News, has me baffled.  The NFL and Commissioner Roger Goodell, have dropped the ball again.

When the Ray Rice incident occurred, Goodell suspended him for a couple games.  That was before TMZ Sports released the shocking video of Ray Rice hitting his fiance with an uppercut that could stop most men in their tracks. After the video came out, Goodell made this comment in a letter to all 32 teams.

“We allowed our standards to fall below where they should be and lost an important opportunity to emphasize our strong stance on a critical issue and the effective programs we have in place. … I take responsibility both for the decision and for ensuring that our actions in the future properly reflect our values. I didn’t get it right. Simply put, we have to do better. And we will.”

Well here we are in 2016 and guess what incident is in the news again?  Yep, Domestic Violence, but this time there is a difference.  The player is a white field goal kicker named Josh Brown.  I know many of you are going to say, why did he have to put that he is white? Well sometimes the truth hurts.  As a white man myself, this is no different than what happened with Ray Rice.  This man was arrested for putting his hands on his wife, and it is not the first time he did it.

The worst part is the Giants are sticking behind him.  The New  York Football Giants are still on board with him and his madness.  The Giants even gave Josh Brown a recent extension. They had to of known of the incident though because it happened in 2015.  So what kind of message does that send?  The Giants gave a man that beat his wife up an extension? That is worse than the Ravens and Ray Rice’s situation.

On Wednesday, when news of the suspension broke, McAdoo said in a published statement, “I do support Josh as a man, a father, and a player.”

When asked by the Daily News if he investigated the matter himself, McAdoo passed the buck, taking no responsibility for such a matter.

“I stay in my lane,” McAdoo told the Daily News. “I don’t have any information on that.”

I am not liking this right now, and I feel that this process is not very fair.  The situations are very similar, the only difference is the skin color. People I am not trying to stir the pot, but let’s face it this is pathetic.