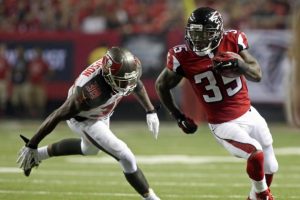 He played college football for Temple University. He was drafted by the Baltimore Ravens in the third round of the 2012 NFL Draft.

The Jets have had a hard time with running backs on the back end of their roster.

He was signed by the Detroit Lions as an undrafted free agent in 2009. He played college football at Florida State.

Smith has been a member of the Minnesota Vikings, Houston Texans, and Atlanta Falcons.