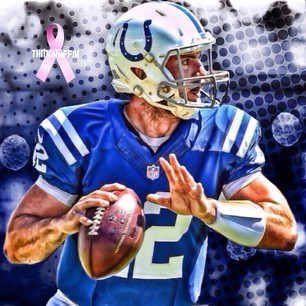 Andrew Luck and the Colts could have a huge year

The Indianapolis Colts are a team that is accustomed to being in the NFL postseason. After the 2014 season, many had picked them as one of the favorites to win the AFC and possibly make a Super Bowl appearance. That hope was all ended as the injury bug devastated the Colts roster. Last year was a down year for the Colts even though they finished with an 8-8 record and missed the playoffs by only one game behind the Houston Texans. This time around as we head into week two of the preseason, the Colts are healthy again and are looking to make a return to the playoffs. The division as a whole has gotten much better, but the Colt are still confident they can return to the postseason.

Last year was a forgettable year for Andrew Luck and the offense. The year before the team survived without a consistent rushing attack but, that was do in part to Luck’s stellar play at quarterback. Fresh off of the largest contract in NFL history, Andrew Luck and the Colts offense looks to return back top form as it was for much of the 2014 season. That all starts with the guys up front. The colts drafted center Ryan Kelly from Alabama with its first round pick to help solve the offensive line issue. They returned the rest of the guys up front including star left tackle Anthony Castonzo, which could possibly be Lucks bet offensive line since he was drafted in 2012. Rob Chudzinski returns as the primary play caller for the calls and will use a three receiver set to spread the field for his speedy receivers, while also opening up running lanes for Frank Gore and company. This will take pressure off Luck and allow him to cut down on his turnovers as he will not be under pressure as often as years past. The running game has always been a question mark for the colts as they have not had an 1000 yard rushing season since 2007. Gore came close last year with 967 yards, but wasn’t nearly as effective. This year they have added Jordan Todman and Robert turbin from free agency while also signing undrafted free agent Josh Ferguson who is expected to have role in the running game after a impressive training camp. With all these running backs on board the Colt are looking to have a successful season on the ground to help take pressure off of their franchise quarterback. The Colts bring back a nice core of young speedy receivers. Pro Bowl receiver T.Y. Hilton leads the group as he is the most decorated of the three and has the most success during his career. Dorsett has amazing potential if but he has to stay on the field and healthy for his talents to be utilized to the fullest .Donte Moncrief proved to be a more reliable receiving option during his second year as he had a productive year. Tight end Dwayne Allen, will have all the attention this year as he was resigned and Coby Fleener signed with the Saints during the off season. He will have a majority of the snaps to be able to produce as he did two seasons ago.

The defense has been the biggest problem for the colts over the past few seasons. With the addition of Ted Monachino as new defensive coordinator, the Colts are expected to run a 3-4 base defense. The heart and soul of the defense Robert Mathis Mathis was injured for much of the year and is returning at the age of 35 to provide a pass rush that is much needed. Opposite him is pass rusher Trent Cole who had a down year but is looking to rebound as he took a pay cut to come back with the team. In the middle along with these two are D’Quell Jackson, the NFL’s tackling leader, and linebacker Nate Irving who has to replace Jerrell Freeman as he signed with the bears in the off season. The key to the defense is being able to stop the run. Up front the Colts return Arthur Jones, who has not played much since his big contract in 2014, Kendall Langford, Hassan Ridgeway, and Henry Anderson. The group as whole was relatively weak during the 2015 season, but with a year under their belts and healthy Arthur Jones this unit looks to rebound and have a productive year. In the secondary the colts return star corner Vontae Davis who is nearing his prime and newly signed free agent Patrick Robinson to slow down outside receivers. At the safety position, the colts return veteran Mike Adams and newly drafted rookie TJ Green to provide run and pass support as the last line of defense.

Adam Vinatieri is still one of the best kickers in the NFL and even at the age of 43 the colts extended his contract two more years. Last year made 25-of-27 field goals, including four of fifty yards or more. Punter Pat McAfee is one of the best punters in the league and is consistently great at his job.. He had surgery on his non kicking leg in the offseason but is fully expected to be ready for the beginning of the regular season. Long snapper Matt Overton is a great longer snapper who was selected to the pro bowl this year after a terrific season. Expect more of the same this upcoming season. The kick return and punt return is all but Quan Bray job to lose. The colts are confident he will hold onto this job going into the season.