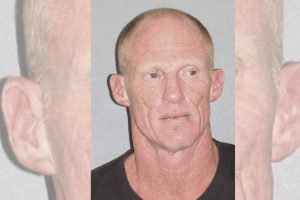 Raiders quarterback Todd Marinovich looks busted up in his mugshot

Do you remember Todd Marinovich? The guy was supposed to be the next Dan Marino, but was horrible. Well the former gunslinger was arrested according to Orange County Register. The reason, he was naked trespassing on a person’s property and had some weed on him.  C’MON MAN….

Former USC star and Raiders quarterback Todd Marinovich was arrested after he was found naked with marijuana in someone else’s backyard, police said Monday.

The 47-year-old was cited for trespassing, possession of a controlled substance, possession of drug paraphernalia and possession of marijuana, Irvine police Commander Mike Hallinan said Monday, according to the Orange County Register.