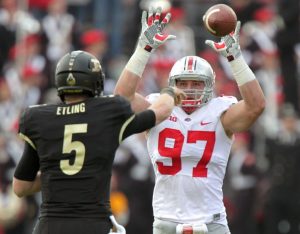 What is going on with Joey Bosa?

The San Diego Chargers drafted Ohio State defensive end Joey Bosa with the third pick in the 2016 NFL Draft, and he still has not signed his contract.  While the front office is trying to get a deal done, their GM feels there need to be a comprise to get a deal accomplished.

General Manager Tom Telesco told XTRA 1360, “There has to be (a compromise) at some point”

He was not the only person talking about Bosa holding out.  The future Hall of Fame tight end Antonio Gates, seems pretty upset with the situation as well.

Chargers tight end Antonio Gates told the San Diego Union Tribune, “My advice to any player that’s going through any kind of contract situation is that, at one point, you’ve got to be a man and you’ve got to understand that you’ve got to get ready to play.”