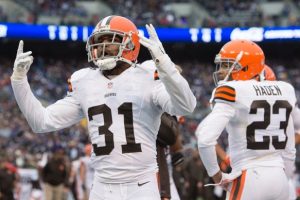 Donte Whitner and Stevie Brown are in Carolina today working out

1 hour ago – View on Twitter
Donte Whitner isn’t the only safety the #Panthers are working out. I’m told Stevie Brown, just released by the #Chiefs, will join him.

Whitner was drafted by the Buffalo Bills eighth overall in the 2006 NFL Draft. He played college football at Ohio State. Whitner has also played for the San Francisco 49ers and Cleveland Browns.

Brown was drafted by the Oakland Raiders in the seventh round of the 2010 NFL Draft. He played college football for the Michigan Wolverines, where he started at safety as a junior for the 2008 team and at linebacker for the 2009 team. He has also been a member of the Carolina Panthers, Houston Texans, Indianapolis Colts, New York Giants, and Kansas City Chiefs.