Browns DB K’Waun Williams has been suspended for two weeks 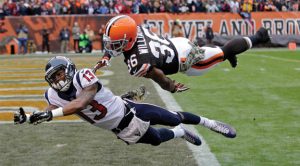 According to the report, K’Waun Williams injured his foot covering Rashard Higgins when they were playing at Ohio State.  He seemed fine and then all the sudden for last weeks preseason game against the Packers, Williams pulled himself from the game.  That pissed off the Browns coaches, and now suspending him.

“We’ll talk about that at a different time,” Hue Jackson said Tuesday. “I just think there are a lot of mixed messages that are going on as far as all that’s concerned. We’ll deal with it, and I’m sure we’ll all talk about it at the appropriate time.”

Williams could be in an ugly situation and eventually end up getting traded.