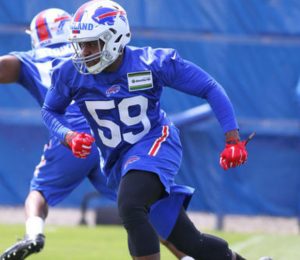 Bills may be in the need of a linebacker or two

Reggie Ragland will not play the entire 2016 NFL season according to the Bills website.

This is a huge loss for the Bills.  The defensive coordinator says the loss is big, and the team will have to make scheme changes.

Bills DC Dennis Thurman on the loss of Ragland says… It’s not necessarily a next man up scenario. They’ll have to make scheme changes.

The Bills did sign veteran linebackers Brandon Spikes and David Hawthorne, but it sounds like it will not be next man up. The Dolphins released LB Danny Lansanah today as well. I wonder if the Bills will bring him in as they were interested in him before he signed with the Phins.